HEALTH  /  Dieting  /  Put down the protein shake – and do this instead

Put down the protein shake – and do this instead

Protein shakes are convenient – but are they as healthy as they seem? Not necessarily, says new research.

From ultra-bulk protein powders to lean mass-promoting snack bars, there’s no shortage of products on the market for those seeking to boost muscle or merely meet our daily protein requirements.

And it’s not only gym junkies with bulging biceps who are fans – the ease and portability of supplement shakes means many of us regularly whizz up protein-packed liquid delights.

But drinking too many protein shakes many could lead to a shortened lifespan, as well as weight gain, bad moods and disrupted sleep, says a new study.

It turns out we might be overdoing it and it’s all about the BCCAs.

Branched-chain amino acids, or BCAAs, are a group of three essential amino acids – leucine, isoleucine and valine – and are most commonly found in red meat and dairy.

Whey protein – the most popular form of fitness protein – is made from dairy by-products and contains high levels of BCAAs.

The new research from Sydney University’s Charles Perkins Centre found that while BCCAs are great for adding muscle mass, overloading can have detrimental effects on our health later in life. 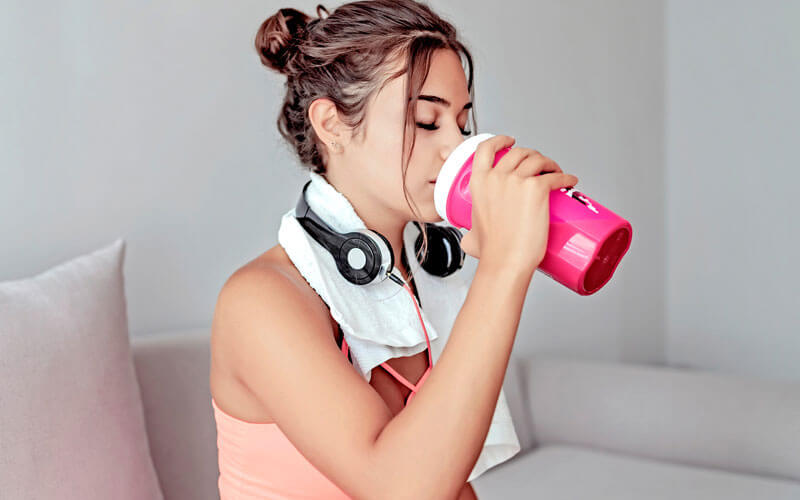 BCCAs can lead to overeating

The researchers tested the effects different amounts of BCCAs had on the health and body composition of mice.

The mice were fed either double the normal amount of BCCAs, the standard amount, half, or one fifth over the course of their life.

“Supplementation of BCAAs resulted in high levels of BCAAs in the blood, which competed with tryptophan for transport into the brain,” explains academic director of the Charles Perkins Centre, Professor Stephen Simpson.

Tryptophan is the sole precursor for the hormone serotonin, often called the “happiness chemical” for its mood-enhancing effects and its role in promoting sleep.

But it does more than this.

“This lowered serotonin levels in the brain, which in turn was a potent signal to increase appetite.

“The serotonin decrease caused by excess BCAA intake led to massive overeating in our mice, which became hugely obese and lived shorter lives.”

Getting a variety of proteins is key

This is best achieved through a healthy and balanced diet rich in fibre, vitamins and minerals.

As well as red meat and dairy, chicken, fish and eggs are also nutritious sources of BCAAs. Vegetarians can find BCAAs in beans, lentils, nuts and soy proteins.

Australians urged to get a flu shot amid coronavirus outbreak

What it’s like to live without a sense of smell